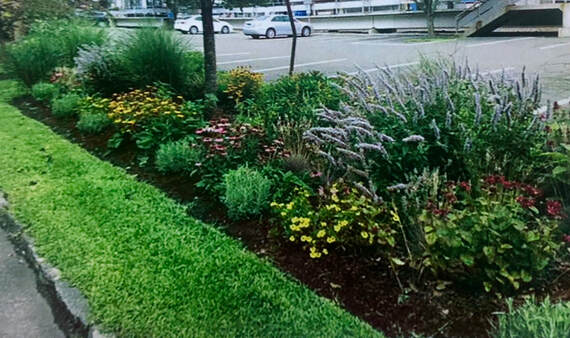 ​The Riverside Garden Club is among the ten oldest garden clubs in New England, making its 101 years of gardening, community beautification, and civic engagement remarkable in breadth and depth. From its early founding in April 1919, by Mrs. Alfred Lockwood and nine other like-minded civic women, the Club has continuously contributed to the well-being and beautification of Riverside and the greater Greenwich community.

Early initiatives included:
⬫ 1919  petitioning the New York and New Haven Railroad for permission to beautify the Riverside Train Station;
⬫ 1920  raising awareness of hazardous road conditions at the corner of Indian Head Road and Riverside Avenue;
⬫ 1938  contributing rhododendrons at the Lake Avenue Overpass on the newly constructed Merritt Parkway;
⬫ 1945 petitioning both locally and at the state level for the removal of billboards along the Post Road;
⬫ 1945  lobbying against the smoke pollution caused by the Cos Cob Power Plant;

Recent initiatives include planting 500 daffodil bulbs and donating a native Swamp White Oak, crucial for supporting wildlife, in Binney Park in 2007 and in 2016. Today, the Club continues its focus on the Riverside Train Station, with the North Native Garden planted in December 2017, and, in the Spring of 2018, three pollinator gardens  were planted. Recognition of these projects include a Conservation Championship Award from The Federated Garden Clubs of Connecticut in 2019 and a featured article on the South Pollinator Garden in the Newsletter and on the Facebook page of The National Garden Clubs.
​
In 1929, when the Federated Garden Clubs of Connecticut (FGCCT) was formed, the Club became a Charter Member, with Riverside Garden Club members playing a vital role in FGCCT’s formation and leadership. The FGCCT subsequently became a Charter Member of the National Council of State Garden Clubs (now known as National Garden Clubs, Inc.) – both umbrella organizations of the Riverside Garden Club. Membership in these organizations has provided the Club with an expansive opportunity to exchange ideas and with a network of clubs that work together on common interests to make a greater impact at the local and state levels.

The vision to care and to be agents for change that originated 101 years ago continue to motivate the Riverside Garden Club membership today, inspiring creativity, friendship, and the joy of service.